Here are a few Hi Tide Fly Fishing in Hawaii Testimonials from our clients!

We had a great time with Captain Jake. We knew these fish were difficult to catch but Jake gave us several opportunities at fish. Their boat is nice and clean. Jake was on time an has a great personality. We will book Hi Tide Fly Fishing again.

Captain Jesse Cheape is born and raised in Hawaii and has the bones dialed in. Years of fly fishing and guide experience to set you up for success! Join the countless other anglers from around the world who have traveled to Hawaii for their first or record bonefish. You're welcome! LOCALTAILS™ aprroved and recommended! 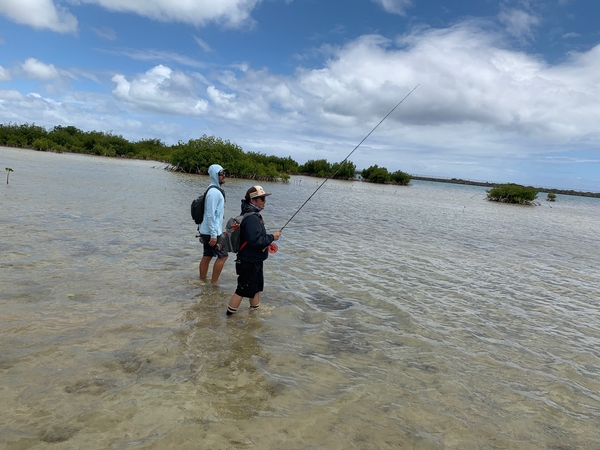 We went out with Jake, one of the guides. Great guide and very knowledgeable of the fishing area. They provided great equipment for us to use. Will definitely go out with these guys next time I’m on Oahu.

Jesse Cheape guided me for two half days of bonefishing on June 18 and 19, 2017. Jesse is an excellent guide with a great flats boat and a comfortable, hard-working style. I have chased bonefish in five other places and was delighted with the area he fishes so close to the city. He gave me multiple shots at large bones and helped me land the largest one of my life…between nine and ten pounds. I would love to return for another adventure with Jesse and this unique setting for large fish. Jesse took this photo of the happy fisherman!

Philadelphia on the Fly: Tales of an Urban Angler and Small Fry: The Lure of the Little

I had felt prepared for the realities of bonefish on the fly. A few years spent at a fly shop full of traveling flats devotees honed me in mind. I heard the stories, reportage from around the globe, although Hawaii had remained an unknown fishery within this circle. I double hauled it to O’ahu when other business took my wife and me to Honolulu for a week’s stay. Captain Jesse Cheape returned my initial inquiry in a fast and friendly exchange that began with “Aloha.” and ended on “Mahalo.”

When Maryann and I dockside arrived to meet Captain Jesse, his welcoming phone manner maintained a positive tone as it switched to the friendly half-day of in­person business that began with an impressive run on his sixteen-foot Action Craft. Mangrove flats greeted our arrival on an easy mooring.

Several spots provided plenty of water to angle, time enough for a casting demonstration, snacks, and talk about the area’s picturesque uniqueness. Wading opportunities for fish – bonefish, barracuda, and papio – cast to on sight equaled only the Captain’s poling the flats. Steady managed progress, even in a robust headwind, offered up the best bonefish of my life; my first.

The silver ingot Captain Jesse put me on charged and changed my usual fishing game played on quiet ponds and trout streams for small fry. This was a wider, most athletic exercise with a heavyweight opponent hooked, grappled, gripped, and released in a sensitive manner. The Captain’s respect reflects his ongoing good fisheries work affiliated with the University of Hawaii.

Tropical savanna mangrove flats, sunbathed, surrounded by misted green mountains and sun bright horizon: the waters Captain Jesse navigate sustain bonefish of the highest and heaviest order. He is a guide up to their challenge.

My new bride and I visited  Capt. Jesse and HI Tide Fly Fishing while on our honeymoon in June. We booked a full day of bone fishing and was not disappointed. I have fished all over the keys and must say the opportunity at fish and the size is superb. We are already planning our 1st anniversary and plan to book again with Capt. Jesse.

I had one of my most successful day’s bone fishing with Capt. Jesse Cheape as my guide on Oahu, HI. In my opinion he is the way a guide should be. He is very calm and encouraging. I mostly fish for trout and salmon in lakes, rivers and streams. A person often gets multiple tries for these fish. Not so with bonefish. You seldom get even a second chance in this game. I usually find myself fishing for bonefish at a time of year when I haven’t cast for months. My casting deteriorates as I miss opportunities for fish, especially with guides that show their disappointment in my efforts. This is not Jesse’s style. He is enthusiastic and explains things well. Not only is Jesse a great guide, he is also fine company and has extensive local knowledge.

Jesse was a true pleasure to fish with. He was very professional and knowledgeable. Oh yeah, the fishing was a blast. We caught peacock bass in the morning, then bonefish in the afternoon. Two species that were on my dream list. The family had a great day at the pool, while I was out fulfilling a dream. I will be sure to call Jesse next time I’m in Oahu.